If you want HD satellite from scratch at the lowest possible cost, this dish and box system has much to offer 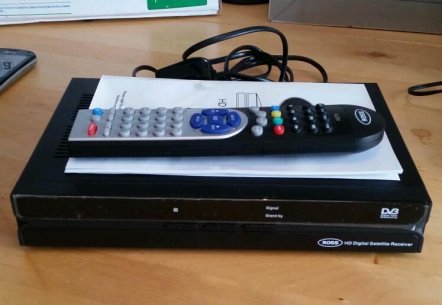 We're a nation of DIY enthusiasts, driven by the desire to save money (especially in these austere times) and indulge in practical creativity. B&Q is now selling satellite equipment with the same gusto as it does tins of paint and flat-packed kitchen units.

Made by Ross, these range from a simple £50 SD kit to a £200 offering a single-tuner HD PVR and dish. We're testing the mid-range dish and the 22300HD-R HD receiver package, the latter of which can be upgraded to PVR operation via USB.

Despite the budget pricing, the receiver is fairly well specified. Dubbed the HDR-8130USB, this compact FTA-only receiver incorporates a single DVB-S/S2 tuner for reception of HD channels alike.

A four-digit LED display for clock/channel number is complemented by front panel control of most receiver features. Front and rear-mounted USB sockets are provided for storage devices. In addition to recording TV programmes, they allow multimedia content to be fed into the receiver.

The single LNB is accompanied by a loopthrough output, while AV outputs consist of a single Scart and a HDMI port. Although there's an AC3-compatible coaxial digital output, no dedicated analogue audio feed is provided.

The 65cm off set dish is fitted with a 0.3dB LNB, and supplied with a bracket that can be fastened to a wall or concrete floor with expanding bolts. Although this system is sold primarily for use with Astra/Eurobird's usual English channels on, its dish could also be aimed at other reasonably powerful satellites.

Indeed, the receiver makes provision for DiSEqC (1.0/1.1/1.2/USALS), and so can be used with a motorised mount. Although a means of attaching the dish to solid ground or a wall is provided, mounting on an existing pole (up to 45mm diameter) is another possibility.

Generously, 12m of LNB cable is supplied pre-fitted with crimp-type F-connectors. This means you cannot fit the protective LNB-connector boot and will need to drill a larger hole than is necessary to pass the cable through woodwork/brickwork.

The dish is fashioned from thin pressed steel, and the construction of its mount makes for difficult adjustment – it has a tendency to 'flex'. But with care and patience you should be able to peak the dish for the desired bird – the receiver's signal/quality bars are a boon here.

The instructions give you elevation/azimuth/skew tables, but although they refer to a compass none is supplied!

Once you've selected a satellite in 'Antenna setting' you can assign a DiSEqC 1.0/1.1 switch position (or access the 1.2/USALS positioner setup function) if needed and configure your LNB.

Pressing the handset's green button gives you a satellite-dependent list of transponders to choose from – plus strength and quality meters. The editing or addition of new transponders involves a separate TP list menu; from here, it's possible to specify PIDs.

Pressing red initiates searching – all/FTA/scrambled, either or both polarities, and with network scanning if desired. Add to this a blind search option. Channels can – with a 'channel manager' function – be organised into one of eight pre-defined favourites groups.

Another setup menu covers audio-visual parameters. The resolution of the HDMI output can be changed from 480i/576i (standard-definition NTSC or PAL) to 1080i50/60. For Scart, you can switch between composite, S-video, RGB and component.

Overall, it's pretty comprehensive for a receiver that B&Q sells on its own for around sixty quid.

The default 'master list' covers all channels; thankfully, an 'advance' list mode facilitates the selection of satellites, and the sorting of channels alphabetically, by transponder or the encryption system employed.

A powerful zoom function is available, courtesy of a dedicated button. Other such controls bring up info about the current programme, select subtitles or alternative audio soundtracks, swap between radio and TV, access two games (Tetris or Snake) and invoke LNB loopthrough USB port teletext.

Red button digital services aren't an option here. Accessed via the 'EPI' button, the EPG – which supports seven-day schedules where available – focuses on one channel at a time.

The channel's EPG data is displayed in a box, outside of which is listed selectable options such as language and the desired date/channel. There's also basic programme information (which can be expanded) and a 'timer set' box.

If you work down the EPG listing, its contents change to reflect the running time of the highlighted programme.

Pressing the OK button on a programme in the EPG sends the relevant details to the timer screen for making a recording. You can't change channel while recording, even if you want to access a service that's carried on the same transponder.

With storage attached, chasing playback is available. Oddly, you have to manually start recording and then press the timeshift button.

The USB multimedia player is compatible with more varieties of content than many receivers with a much higher price. JPEG/BMP images and MP3/WAV/WMA audio, DiVX/XviD and x.264/MKV (1080p was handled with no problems) are supported.

The dish and receiver were tried with Astra 1x, Hot Bird and Astra 2x/Eurobird, and reliable reception was obtained from all of them. Channel selection and menu access are responsive, and the standard scanning modes were faster than expected. Blind scanning is also fast, but it found fewer channels than a regular 'all-channels' scan.

Picture and sound quality via HDMI were fine. HD images, particularly, are praiseworthy, given the modest price.