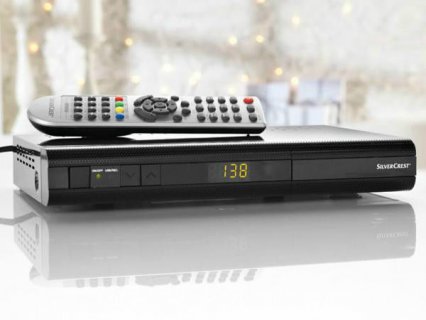 I have just bought a Satellite and Receiver from Lidl for £60. It was initially set up to receive German Channels, but I have changed it to receive Channels from Astra 28 East. I now have a huge range of English Language channels. I could have set it up to receive a Polish channel.

What channels you receive ? I thought that there isn't the possibility to receive the british channels because they are locked, so you must get a special receiver what only is in the shops in England. Are you in Germany?

There are a lot of British Channels that are 'Free to View'. The BBC is trying to convert to Digital, and their production is 'Free to View', as is ITV and Channel 4.

In addition some of the other programs have English language broadcasts. I have just been looking at Abu Dhabi TV.

Most Satellite Dishes and Receivers in the UK are distributed by Sky, who put together a very tempting deal, to encourage people to use their system. A lot of the Sky channels with the exception of Sky News are locked or Scrambled, and you need a special card in order to access them.

Lidl is a German Company, and a lot of the goods they sell in the UK are sourced from Europe. When I set up the Satellite and the Receiver, the first satellite that I found was Astra 1, and most of the content was in German. I was then able to find Astra 28 East, which I think is the same satellite that is used by Sky. After I found it, I deleted the pre-set channels from Receiver, and I then did a search to install the channels from Astra 28 East. You can then group and sort the channels that you use most often so that they are easy to find. Otherwise you have to search through about 610 Channels.

The Receiver can be set to a variety of different languages.

I was so impressed that I decided to go back to Lidl and to buy a second receiver (for a second room), and a larger dish. When I got to the shop, I found that they had almost sold out. So, I also bought another complete satellite kit.

From Aberdeen. Scotland, I can get all the UK terresterial channels by satellite, and I get much better reception than I get with a normal aerial.

Thanks for the infos:) I think that many people will find it very helpful and interesting what you've written.

I looked to see what's the footprint of the Astra 28 east 2D, and I've discovered that I will be able to receive those programmes with the 60cm or 75cm dish. For sure I will hope to get a satellite and receiver now!!!

Am I right in thinking that you live in Holland?

The satellite dishes from Lidl come in two sizes: 57 cm and 80 cm. The bigger the dish the better.

This company is an Irish company, and they say that they always fit the 80 cm satellite dish.

I believe that one of the reasons why people in Holland speak such good English is because they watch a lot of British Television.

If you live in Poland, you probably cannot pick up the main satellite, (Astra 28 East), and will have to make do with other satellites that have some English language content.

I'm in Belgium ; I live in the border region of Belgium-France-Luxembourg, and the most of our tv channels are in french, some german and dutch, but we haven't english channels.

On the cable you can receive BBC1 and BBC2, but we don't have in our house this channels because we have an aerial (analogue) for receive our tv.

Yes, it's true -people in Holland can speak very well english. I think in Flanders also, but we have more difficulties than they - maybe it's because what you've written : they watch a lot of British Television. It must be very helpful to listen often the language if you wish to fluently speak and understand well. When I read it, I can understand much, but when it's spoken, I don't have no idea what do they say, so I'm enthusiastic for obtain the satellite kit.