This HD-compatible Linux PVR certainly ticks all of the boxes 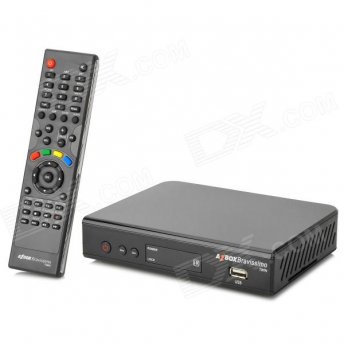 Twin tuners, HD-compatibility, hardware blind search, Ethernet and integrated 802.11b/g wireless networking, provision for an internal HDD and a comprehensive multimedia player. Most PVRs give you some, but not all, of these desirable features, but the Linux-powered Premium HD+ literally does go all of the way from A to Z.

Incredibly, all of this can be yours for around £380 sans HDD. We successfully added a 1.5TB drive, which are available for about £70 nowadays.

This fully loaded box is remarkably compact – largely because its power supply unit is an external 'brick'. Yet you get at least the usual complement of controls; in addition to a front-panel joypad disc that lives next to an 11-character fluorescent display is a selection of keys for menu access.

Behind a front-panel flap lives a USB port and the conditional access hardware, which takes the form of a pair of CI slots and an as-yet-unused card reader. The accompanying handset is packed with buttons that drive the unit's many functions, but has a rather tacky feel to it.

Connectivity is similarly comprehensive. The twin tuners, which are 'pluggable', have inputs and loopthrough outputs. Hopefully, AZBox will introduce a DVB-T2 tuner for UK terrestrial HDTV. Only one RGB capable Scart is provided. A bank of phono sockets output stereo analogue audio, composite and component video.

Above an optical digital audio output is a programmable 12V outlet for accessories like switchboxes. Next to these are the Ethernet and USB connectors, the latter usable for applying software upgrades and recording to external drives.

Finally, we have the HDMI port, which is 1080p-compatible. Nothing's currently being broadcast in this format but regular TV is upscaled or de-interlaced by the box.

Internally, this receiver is neatly laid out, packing a powerful SMP8634LF 'jungle chip', aided by plenty of memory.

A top-mounted screw-in plate yields access to the (SATA) HDD compartment. Installing the drive, which is screwed into an internal 'cradle', is straightforward enough.

Formatting is handled by a setup menu option. On which subject the Premium HD+ doesn't – unlike some other Linux-based receivers – rely on a derivative of the Enigma firmware.

Instead, it runs proprietary code –- you won't be able to find alternative firmware. That said, tools for developing plug-ins and applications are freely available from the AZBox website.

Specifying your outdoor equipment, defining satellites and channel searches are the remit of the 'TV Channel' setup option. The Premium HD+ will cater for two independent dishes aimed at different satellites, the PVR ideal of a twin LNB setup, or the least satisfactory option of a single LNB plus loopthrough.

The next step is to define each satellite. The LNB type, and a DiSEqC switch 'position', can be specified if more than one satellite is available. A separate menu looks after DiSEqC 1.2 and USALS motorised dishes; this is quite flexible in so far as motor memory locations and movement step sizes can be entered manually.

Signal strength and quality bars, plus the ability to choose a preset transponder, will assist searching. The basic search, 'satellite scan', looks for free and/or pay-TV and radio channels. Courtesy of a checkbox arrangement, multiple satellites can be selected.