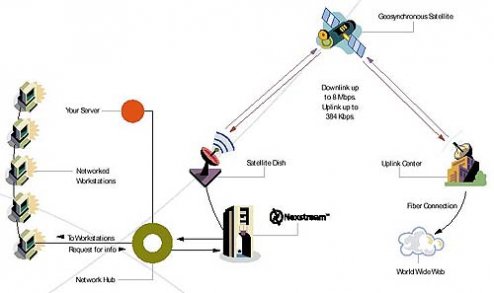 In a relatively short time, satellites have become an essential part of global communication. In 1960, the first TV satellite, named Echo, was launched. It was basically not much more than a reflector, which reflected the TV signals it received from earth. Two years later Telstar followed, which was the first so-called active TV satellite. Instead of only reflecting the incoming signals, it also converted the signals in order to avoid interference between the incoming and outgoing signals.

Telstar had a rotational speed which was different from the rotational velocity of the earth, so it had to be followed very accurately by both transmission and reception stations. In 1964, this problem was solved, when the first earth-synchronous satellite, Syncom, was launched. Many others have followed since. The most well known is probably Intelsat I, which was launched in 1965. By 1969 the satellite net had expanded to a worldwide communication and TV network.

In December 1982, the Astra I satellite was launched, which generated new interest in satellites from the general public in Europe. With its coming it has become possible for people in Europe to receive TV and radio transmissions with a small dish antenna.