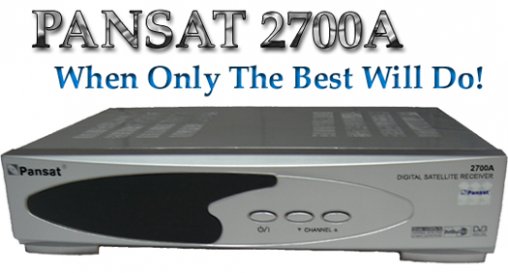 I have been using a Pansat 2500A for a few days and have a few questions I
would like to ask. Mainly I just want to make sure that what I think is
true, really is. Note that I am only using this receiver to pick up true
FTA signals on C band. I have not attempted to upload new firmware or
anything like that.

1) I assume that my receiver is not the only Pansat 2500A that ever
occasionally says "no signal" on every transponder (even though a perfectly
good signal is present), and the only way to escape that condition is to
completely power down the system? Is there any fix for this, or any way to
restore functionality without a complete power down?

2) On some transponders I get no audio at all, and if I check for audio
subcarriers it will show that it's an AC3 audio signal. So the receiver
apparently knows what AC3 IS (since it can tell you when it is present) but
apparently it can't actually decode an AC3 audio signal? Or am I missing
something here? Is there a chance that Pansat could someday supply update
software that would allow reception of AC3 audio (or have they perhaps done
so already)?

3) Sometimes I see a signal that is listed as being Hi Definition or 4:2:2
- so far I don't think I've seen the receiver properly decode these. Is
the receiver not at all capable of decoding such signals? Or is it just
that it can't translate them to a format that a plain old non-hi-def TV
understands?

4) Right now I have a large dish with C-band and Ku-band LNB's, although
Ku doesn't come in very well (still have to figure that out). But I also
have an old discarded Primestar dish with LNB with both H and V jacks. I
only speak English, so I don't think I would have any interest in foreign
language programming. I am not interested in religious channels, and I so
seldom watch anything on PBS that it hold little interest for me. In
short, it appears that the ONLY Ku-band satellite that would hold any
interest for me is Galaxy 10. Is there any reason I should be interested
in any of the other KU birds? If not, could I take a 4-input DiSEqC switch
and connect one port to the C-band LNB, one port to Ku-band LNB, and one
port each to the V and H output on the Primestar dish LNB, then point the
Primestar dish at G10 so as to have instant reception of most of the