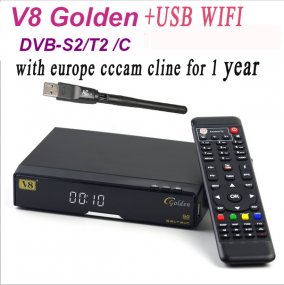 For those who remain undecided between terrestrial and satellite, we present the TM-8000 HD Combo from Technomate. This smart-looking unit, which has a top-mounted cooling fan, includes both satellite and terrestrial tuners.

It can be upgraded to full PVR operation, by inserting a 2.5-inch SATA hard drive into a slot that's hidden behind a front-panel flap. A neat idea, it has to be said.

However, although the satellite tuner (and the receiver itself) is capable of tuning into hi-def channels, courtesy of its DVB-S2 compatibility, the same is not true of its terrestrial counterpart. This caters only for the DVB-T standard, and so the hi-def channels are overlooked.

The TM-8000 HD Combo really comes into its own when you have both types of antenna connected – with the HDD installed you'll be able to record one while watching another. The receiver caters for multi-satellite and with the appropriate outside hardware you'll be able to expand your viewing choice (which includes some European HD transmissions).

Other useful features include blind search, provision for pay-TV upgrades, a multimedia player, integrated networking and – that rarest of things – a UHF modulator.

A centrally mounted LED cluster on the glossy frontpanel punctuates the centrally mounted joypad, which is used to change volume level or step through channels. Menu and exit buttons allow basic configuration parameters to be accessed too.

The comprehensive fluorescent display is an unexpected delight in these days of cost-cutting. On the opposite side of the front panel is a flap that conceals the aforementioned HDD compartment, a USB port and the conditional access hardware, which consists of a card-reader and two CI slots.

The HDD is a fairly tight fit, and it's perhaps just as well that our Technomate-fitted HDD boasted a tab for removal – even with the finger recesses removal would be quite tricky without it.

Rear-panel connectivity is comprehensive. Both the terrestrial and LNB feeds benefit from loopthrough facilities. Taking the form of an additional loopthrough facility, the UHF modulator is useful, as it would allow off-air services and received channels alike to be distributed around the house via UHF.

Your main TV can be hooked up via HDMI (up to 1080i), component, RGB/composite Scart or S-video. HDMI and a standard-def output can be active simultaneously, a useful feature for those with complex multi-room AV setups.

Among the data connections are a second USB port, RS232, e-SATA (for external HDDs) and Ethernet. Sadly, Technomate hasn't yet done anything meaningful with the latter. All you can do for now is access firmware updates and update channel lists.

Among a plethora of menus is 'installation' where you'll find a series of submenus covering dish setup and terrestrial/satellite scanning. For each of the desired satellites, you can specify a transponder (its signal and quality are displayed in bar graph form), LNB power setting and DiSEqC 1.0/1.1 switch-position.

A simple 'all-and/or-free' search can then be invoked – additional refinements include network and radio specific scans. This should suffice for most situations, however, 'advanced search' is also provided. From here, you can choose one of the target satellite's preset transponders. These can be edited or added to; polarity, search type, network scanning and symbol rate are all changeable.

For some reason the ability to specify PIDs is not provided, although the channel editor will let you modify the PIDs of existing channels.