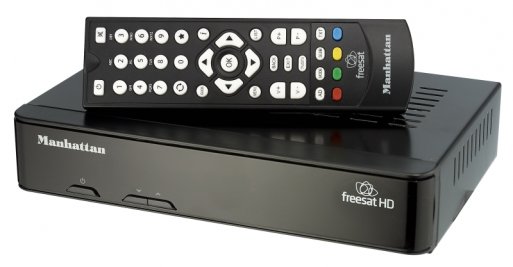 It’s an affordably-priced Freesat receiver that brings free digital TV into your home through a satellite dish. It’s not a PVR, just a basic set-top box for those who simply want to watch their favourite SD and HD channels – although you can also stream on-demand content from BBC iPlayer and ITV Player. What’s more, it’s the most compact Freesat receiver to date, making it ideal for use in a second room.

The Plaza is encased in a dull-looking black box with a few buttons on the front. But the lack of modern-day panache is hardly surprising given the price and to its credit, build quality is good thanks to the firmly-bolted aluminium top panel. It measures just 210mm wide, which is about half the size of most Blu-ray decks.

Front buttons include standby and up/down keys for changing channels, all of which have a clunky, plasticky feel, but again it’s commensurate with the price. There’s no display panel showing channel names and the like – all you get is a small light that glows red in standby and blue when switched on.

On the back is a decent selection of sockets for the money, including an HDMI v1.3 output, Scart output (which can be connected to an older TV or external recorder), optical digital audio output, Ethernet and an LNB input. There’s a USB port too, but don’t get too excited as it’s only used for upgrading the unit’s software – it doesn’t support media playback, Wi-Fi dongles or HDD recording.

As well as bringing you Freesat’s range of over 150 TV and radio channels (six of which are in hi-def), you can also scan for non-Freesat channels automatically, expanding your selection even further. Connect the box to the internet via Ethernet you can also access BBC iPlayer and ITV Player and catch-up on the last seven days’ worth of programmes.

The box also supports interactive TV, digital text, Audio Description and subtitles. The HDMI output will send pictures to your TV in 576i, 576p, 720p, 1080i and 1080p, while on the audio side it supports Dolby Digital Plus, Dolby Digital and HE-AAC.

There’s also an eight-day EPG and a Favourites feature that allows each member of the family to have their own channel list and filter out ones they don’t watch. Even better news is that you can add non-Freesat channels to Favourites lists, a unique feature that means you don’t have to search for them every time.