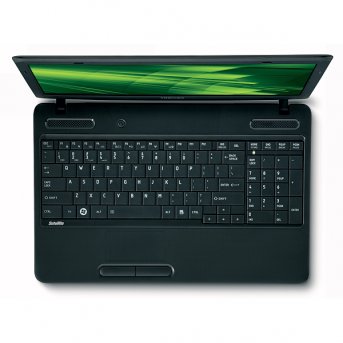 There's a common conception in laptop purchasing that the best values to be had on the bottom end tend to lie in the "doorbuster" 15-incher. We've seen these laptops advertised during holiday shopping seasons and in store circulars-they're big, cheap, and they usually feature severely underpowered processors.

The Toshiba Satellite C655D-S5130 is notable because the processor it carries is one of the new AMD Fusion APUs (AMD's term for a combo CPU/GPU), a platform we've previously only seen on 11.6-inch ultraportables such as the HP Pavilion dm1 and the Lenovo ThinkPad x120e. The C-series is Toshiba's ultrabudget line, a generic black-box-type laptop with sometimes-decent specs. Priced at $398, the C655D-S5130 seems at first glance like an intriguing new bargain. And yet it isn't: that AMD processor isn't an E-350 like we saw on those 11-inchers; instead, it's a lower-powered E-240.

We reviewed the Toshiba Satellite C655-S5049 in last year's summer retail round-up of laptops, toting a Celeron 900 CPU for only $349. That configuration had 1GB less RAM than this AMD Fusion variant, but it outperformed the C655D-S5130 in our benchmark tests, despite being less expensive over half a year ago. This configuration's upgraded AMD graphics add a little more to the equation, but even they underperform. They're not suitable for gaming, and even underwhelm a little when running Flash-based streaming video.

Yes, this is a bargain-basement machine-but you get what you pay for. This Toshiba Satellite is, at best, a lateral move from those cheapie models you've seen advertised in circulars for years. Not much more, and in a few instances, even a little bit less.

The Toshiba Satellite C-series is a budget laptop, but even considering that, it's remarkably pedestrian and generic-looking from a design standpoint. The all-matte-black exterior and interior, molded in a patterned grid texture, just feels cheap compared to Toshiba's higher-end models. Plain black speaker grilles above the flat keyboard, a thick overall case design, and a distressing amount of flex on the sides and at the seams along the front edge of the palmrest make this laptop uninspiring to behold.

The nearly edge-to-edge keyboard and full number pad do make the most of the available space, but the flat keyboard's mushy keys ruin what otherwise could have been a better experience. Despite the ample room, the matte inset multitouch touch pad is small, and isn't even as wide as the thick, round dual buttons below it. The multitouch Elan software installed on our C655D-S5130 lacks the same diverse gesture vocabulary of higher-end Synaptics touch pads, and the surface area is too small to easily maneuver with average adult-size fingers.

The large, bright 15.6-inch inset glossy LCD screen is what probably brought you to consider the C655D-S5130 in the first place over smaller laptops. The screen is easy on the eyes, but at 1, 366x768-pixel native resolution, images and text can get a little pixelated up close. At the same time, most 15-inch laptops have the same resolution, especially at this price. Videos were very watchable on the C665's display, but viewing angles were limited before the picture quality rapidly diminished.

You shouldn't expect any bells and whistles on the entry-level config in a budget laptop line, and needless to say, this laptop has none. No Bluetooth, not even HDMI. This is nearly as bare-bones as laptops get in the modern era.

Toshiba's Satellite C650 series of laptops spans a wide gamut of configurations on the Toshiba Web site, ranging in price from our unit's $398 to around $600. Processors include a rogue's gallery of budget CPUs from AMD and Intel in all colors and flavors. There are AMD Fusion processors-both the E-240 and E-350-plus Intel Celerons, Pentiums, Core i3, AMD Phenoms, and more. If you're considering the Satellite C650, you'd be well advised to browse all the available configurations on Toshiba's Web site-when we checked at the time of this review, there were a whopping 32 varieties.

Deciding which budget processor to choose on a laptop, when so many options present themselves, becomes a daunting task. We haven't tested all the CPU configurations on the C650 line, but we can at least report that the AMD E-240, the processor in this C655D-S5130, doesn't live up to the promise we expected.

The E-250 is part of the AMD Fusion family of processors, which features semidiscrete graphics onboard. We've seen the deceptively similarly named E-350 in a variety of 11-inch budget ultraportables and have been pleasantly surprised with how well it performed. This E-240-equipped C650 isn't the same story. In benchmark tests, the C655D-S5130 was markedly slower than its tiny 11-inch E-350 brethren in both single apps and multitasking. The C655DS5130, despite its larger size, is an inferior computer. It's even significantly slower than the Intel Celeron 900 processor in the last C650 we reviewed, the C655-5049. (Incidentally, Celeron 900-toting C650 models are still available on Toshiba's Web site, at prices starting around $449.)

We haven't tested the E-350-equipped Satellite C650, but it should come closer to the performance seen on laptops such as the HP Pavilion dm1. We can't know for sure, though, at this point. If you're considering a Satellite C-series laptop, however, we'd strongly suggest you pony up a few more dollars and consider, at least, the Satellite C655D-S5139, which includes the improved AMD E-350 processor for $449.